Thursday night was spen clinging to a mooring in Ballvicar encrusted in barnacles. Ewan however was overjoyed when he hooked a mackerel on some rather faded feathers. Tea was cooked so we threw it back!
We went through the Coran narrows and moored up next to a fish farm for breakfast. Unfortunately they seemed to have solved their seal problems and there did not appear to be any escaped salmon outside. We used to catch them with sweet corn on Mull, the kids loved it.
We went through the sea lock at Crinan to moor up and enjoy the arrival of the steam hauled Fort William to Mallaig exprees. There was a brief vision of table lamps and Gin and Tonics and the next instant they were away with a distant wail from the loco all polished and in full British Rail livery.

Saturday morning arrived with Nigel Bickerton and Mark in the car park. They had driven up overnight from North Wales to fix the new tracking device . They had a telephone conference with their engineer mate in Sochi Russia and diagnosed a faulty connection. Amazing!

Ewan ,Lawrence and Josh scrambled onto the early train to North Wales. They have been great crew with plenty of grunt. Josh's finale was sorting out a foresail wrap at the top of the mast while we were underway off Oban. There were cheers from a nearby cruise ship.

On Saturday evening my old Medical School mates John Cullimore and Ceri Roberts rolled off the train at 10.30 pm . After tea and whisky we were all set to lock up Neptunes staircase (Loads of locks  which took three and a half hours in pouring rain).

We pulled up for a fry up at the top of the lochs, and then ploghed on to Gairlochy with the mountains shrouded in grey cloud at 550 feet. We crossed Loch Lochy and arrived at Lagan Lochs with a gale brewing up behind us and a jammed up Genoa curler. We nearly ran aground on some motorboat moorings and turned the head of the boat into wind in a narrow channel to moor up. Apparently we heard from the lock keeper that it was gusting Force 9 off the inner hebrides. Thank goodness we were inland! Kikas heater is now working fine so we cancelled a run ashore to settle for a curry and dry out on the boat.

No Josh Cook, so went up the mast in the morning to sort out the Genoa wrap . Not too bad , but energy levels for climbing definitely flagging. Had to have a good rest on the crosstrees!

What a difference a day makes, Just a brief shower and then the sun shone drying out our oilies. We started by going through Laggan Lock. Laggan is the site of the battle of the shirts where the bloodthirsty MacDonalds finished off most of the Fraser Clan. There are parallels with Afghanistan!

After a day's gentle cruising accross Loch Oich we have arrived at the top of five lochs taking us down to the fabled Loch Ness. No sign of the monster. 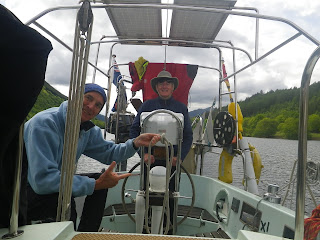 New crew with oilies drying out