On Sunday 24 June we set off on 2 weeks of sea trials to iron out any problems. Conwy to Holyhead was achieved in short order on the back of a spring tide and a Foce 5 South Westerly wind. At times off Wylfa power station we were doing 9 knots over the ground with the tide. In view of the rough water caused by wind against tide off Carmel Head we went outside the skerrries and tacked into Holyhead just behind the skerries light which gleamed at us like a lonely sentinel as we went past.

Monday was blowing a Force 6-7 on the nose from the North so we spent the day fettling and buying expensive pieces of kit from the Chandlers. The Old Gaffer fleet was also stormbound in port so we joined them for a singsong in the yacht club. Richard Lewis was particularly taken with a rendition of the old 8th Army song "we are the D Day skivvers in sunny Italy" sung to the tune of Lily Marlene. It was full of soldiers ironic humour about having tea with the Germans and some really pointed comments about Lady Astor.

On Tuesday we motored over a glassy sea to Port St Mary on the Isle of Mann. The fishing kit and trolling line came out. We don't seem to have mastered the art yet as we ended up minus some feathers but no fish.
Have subsequently bought a huge old fashioned Alvey Reel and some 100lb breaking strength line which will hopefully change the situation.

Wed 27th June we battled through the Sound  just North of the Calf of Mann where we had a wind against tide situation at the exit. Unknown to us this was seen by a birdwatcher doing a Manx Shearwater survey. We subsequently met Andrew Godd on the Isle of Mann steam train to Douglas where he happened to mention a yacht overcoming "mountainous seas " and to our surprise showed us a picture of Kika which he kindly E mailed over. The rest of the passage to Peel was hard going as there was a big swell slowing the boat as we tacked up against a Northerly Force 5 . It took us 4 hours to cover 12 Miles and had to motor sail to point a bit higher. We were too late to get across the Sill into the Marina at Peel and had a rather bumpy night tied up against the outer breakwater. Peel was full of French and German bikers getting ready for the Isle of Mann TT 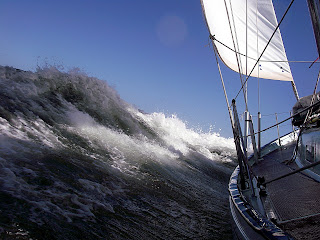 Close hauled up to Peel

Thursday. We made good time doing 60 miles accross to Drogheda in 8 hours. The river up to Drogheda is beautiful and the site of the famous Battle of the Boyne. The town itself was famously sacked by Cromwell and still appears to bear the scars- there are no facilities for visiting yachts so we rafted up against the only other yacht in the centre of the river and had scrambled eggs Salmon and lots of Gin and Tonic for dinner prepared in a jiffy by Catriona Fearn who was informed that the dinghy pump was'nt working and what had we got in the stores for dinner!

Friday  Arrived in Dun Loughaire where we secured a berth at the Royal St George Yacht club. We were made very welcome by the sailing manager and the Commodore. We then basked in luxurious showers , Richard Lewis and Iain Mitchell played a couple of Frames on Irelands' best full size snooker table while Colin Sharratt and I had an afternoon nap in the library to work off lunchtime Guiness! Dinner was a superb steak in the club Bistro to celebrate Ian Fearns Birthday - We had definately landed on our feet  for a 33 Euro mooring Fee. 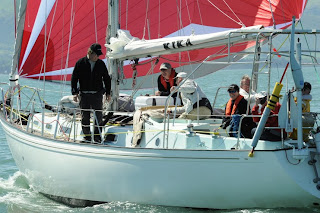 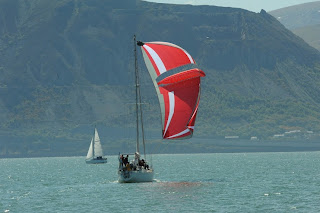 On Saturday May 25th Stuart Anderson from Seateach kindly joined us to demonstrate the parasailor. This is our main hope for getting Kika, a medium to heavy displacement boat moving in light airs and save on the diesel. We arrived at the fairway buoy off Conwy to be greeted with a gentle Force 2 Zephyr of a Northerly Breeze. The sail behaved impeccably. We clocked up  4.5 knots downwind and 5 knots on a reach. She is easy to handle with a good snuffler system and you can even Gybe it across the bows although its tricky to make 10 degree sequential alterations in course and adjust the sheets and guys progressively.
Clive arrived in Sephina after launching at Beaumaris with as brand new engine and zoomed around taking the shots.
Apart from the price we all agreed that there wasn't much not to like about the parasailor and celebrated over dinner on a gloriously sunny evening on the balcony of the Deganwy Keys Hotel with Conwy castle glimmering across the river in the late evening sunshine.
Posted by Yacht Kika at 14:18 No comments: