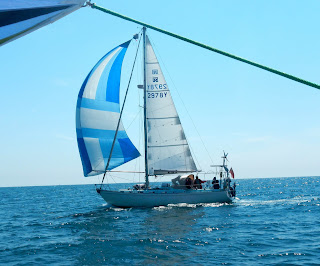 Kika is a Rival 38 built in  1976 by Southern Boat Builders. It was an exhibit at the London boat show which meant that they did the joinery well. She is an aft cockpit long keeled Bermudan sloop and was well laid up because in those days they worried about osmosis. She is a comfortable medium to heavy displacement good sea boat. This means she is fine in a storm, reverses like a pig because of her long keel, and does an average speed of about 6 knots.

The previous owner, Nick Ager, had just completed a circumnavigation when I brought her. He knew her inside out and had got rid of many of the glitches. Since then we’ve been sailing her around the Irish Sea for three years, gradually upgrading a few systems, and learning what goes wrong.

The plan was originally to do a complete circumnavigation. However the piracy situation in the Indian Ocean means that either you have to go around the Cape of Good Hope and back to Brazil before going home (a very long way) or put her on a container ship from India to the Mediterranean at a cost of over £20k, which my mate Clive Sparkes will be doing with his boat Sephina an Oyster 43, but only because he wants to eventually live aboard in the Mediterranean.

We have decided to take the old clipper route from New Zealand to South America using the prevailing Westerly winds to the North of Antarctica. It’s a bit remote but my son Tom is up for that leg because he fancies the challenge of the Southern ocean. Kika is a strong boat and should stand up to it but there is nobody there if you get into trouble.

My friend Colin Sharrat and I will be the nucleus crew but hopefully loads of ne’er do well friends and family will fly out to do various legs as Kika can comfortably accommodate four people at sea.

I suppose it’s the old story of being jack of all trades and master of none, but leaving on time in August 2013 regardless.
Posted by Yacht Kika at 15:01 No comments: