Finally Sat 27 arrived and lots of friends gathered at the Deganwy Keys hotel to see us off.  Jon, Colin, Vince and James are heading off on the first stage of the voyage. The initial passage plan includes berthing in Ireland, Portugal, Morocco and the Canaries.

For the start Dave North Coombes and Andy Grace came for a ride across the harbour. John Cullimore, Ceri Roberts, Hugh Clifford and Patrick came on the first leg to Holyhead which was calm, so the party continued all the way there meeting the girls for dinner in an Italian. Fifteen of us made so much noise the the other poor diners seemed to eat up and disappear rapidly. Finally it was time to say goodbye to Bridget and the reality of what lay ahead began to dawn. Lots of thoughts span round and sleep was spasmodic. Everyone's generosity in sending cards/messages/ and presents for the voyage was very touching so it was sad to leave so many good friends and family for two years.

The weather was closing in so met Clive and Judith in Sephina and mutually decided to go as far South in Ireland as we could. First thing on Monday with a foul tide and poor wind we sat off South Stack and wondered how we were going to get round the the world. Clive fared better punching through the tide with his powerful Yanmar engine . After we had decided to give up and head for Dublin, the wind improved the Aries wind vane performed brilliantly and finally the tide turned in our favour and we arrived in Arklow at 10.30 pm and moored up next to Clive in the river. They had already had a number of Gin and Tonics!

Monday was spent recovering, mending the Automatic Identification System which James finally traced to a loose wire after a long technical conversation to Raymarine. Clive got me to learn to download Grib weather files from the Internet and after Spaghetti Bolognese cooked by Vin a musical session and some Guinness we prepared for a 5am start to catch the tide South.

Tuesday found us in Kilmore Quay after steaming past Wexford and rounding Carnsore point in good weather. The boat is now in good order and we may have to sit it out for a while while some gales go past possibly getting a weather window to cross for Portugal by the end of the week.
Posted by Unknown at 06:57 2 comments: 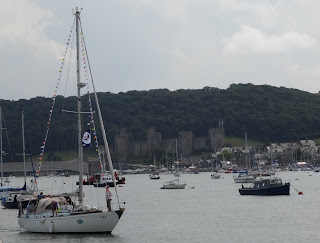 Pictures from Setting Off 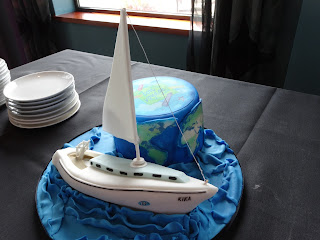 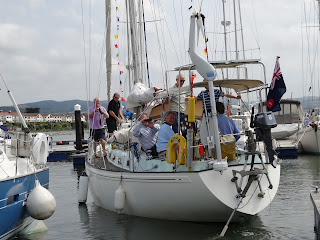 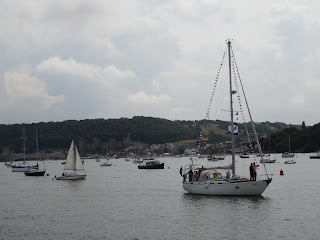 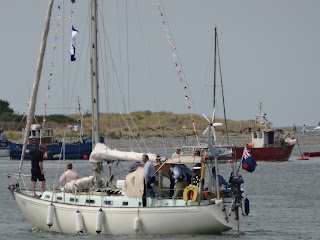 The beginning of June marked an extended sea trial where Jon and Colin were joined by James Hale, ex Royal Marine and honorary ships engineer who fixed the shower pump immediately, Gerry O' Donoghue some sort of Professor and our director of shore based operations, namely getting us to the TT raceS on the Isle of Mann and the best restaurant afterwards, and Tony Power ships purser on treble accounting, and jewellers shower head repairs.

We left Dun Laoghaire and visited Carlingford Lough on the border between Southern and Northern Ireland. The marina was built in the boom years and had a helicopter pad for Dublin high rollers. Now half the pontoons are sinking and there's no one there to collect the fees.
Next stop was Portaferry inside the tidal entrance to Strangford Lough. Fish and Chips from a shop famous for the best in N Ireland and a Guinness at the fiddlers arms where the delightful landlady was having a quiet night preparing the pub quiz. She gave us an old one to do on the boat. Tony Power who always has a book handy won easily.

Strangford to Port St Mary was an easy passage mainly under engine.The next day we took the steam train to Douglas and spent a lovely sunny day watching the TT races. First the 500cc bikes at quarter mile bridge and at lunch we walked down the track to another bend where we watched the sidecars. There were thousands of biking enthusiasts from all over the world and it was great to see just about every make of bike both old and new up and running.
Lovely passage back to Conwy via Holyhead with the wind on the beam and the parasail up.

The next few weeks have been a frantic combination of a trip to Edinburgh to collect a lifetime award from the chief wizard of the BMA for being a professional thorn in the side to NHS management. A few days walking with Bridget on the Fife Coastal path and hay-making at home. Getting the boat ready has meant endless lists, continuing sagas with bilge pumps , the toilet and holding tank , and the Duogen generator. Fortunately I was berthed next to Clive Sparkes in Sephina who was characteristically generous with both his time, expertise , and cast-offs . Delivery drivers now know exactly where our house is.

The electrical systems on a yacht are quite complicated. You need to generate enough power under sail to cover daily usage. Carl Filer from TLC electronics was a genius at working out which regulator was required for the engine,solar panels and wind generator and then burrowing around in awkward corners to install them. James and Colin rebuilt the Aries windvane which had too much play in the bushes and was resulting in a very erratic course when used and during the final week Colin arrived to live on the boat and restore order and calm to a boat in bits.