Iain,Cat and Ian set off in a hired car for North Wales on Saturday morning, to be replaced by Gerry O' Donoghue and Glyn Jones who geared up for an early morning departure to Eyemouth 47 miles away. It was a lovely morning with a crisp blue sky and initially good progress across the Tay Estuary and past Fife Ness where we were greeted by a number of puffins off the Isle of May. These lovely birds fly off when the boat comes close flapping their wings rapidly and trailing their red legs behind them. My uncle Alfred rescued one from a fishing net off this coast many years ago. Perhaps we were watching his descendants. Progress across the Forth was slow because the foul tide kicked in, but at 6 pm we passed St Abbs head where an Air Sea Rescue of a diver was in progress. We could hear the worry in the dive boat skippers voice as he reported the casualty initially unresponsive and in the water followed by relief as he was recovered on board and started to respond. The helicopter arrived promptly and winched him up to take him to Aberdeen Royal Infirmary where there is a decompression chamber.

At Eyemouth we ratfted up outside 2 other boats and after dinner on board walked into the town. There is a very large Georgian Building owned by a Mr Nisbet who conducted a huge smuggling operation while posing as a respected local merchant! It was ever thus. We took a walk accross the seafront and watched the sun set at around 10.45.

Monday meant another long run to Blyth of around 45 miles. We took the inner channel between Holy Island and the Farne Islands which were covered in Guano from the large bird colony. Seals ,Gannets, Terns , Guillimots and Puffins circled around us as we passed the monastery on Holy Islad and Grace Darlings lighthouse on the Farne Islands. Her rescue of shipwrecked Mariners was the inspiration for today's life boat institution. The wind kicked in later in the day and we made good progress to Blyth , a large port and the headquarters of the Royal Northumberland Yacht Club, whose headquarters is a converted lightship in the Marina. There was a fantastic folk concert going on and we were made to feel very welcome.

Unfortunately we have been storm bound for three days. 30 knot winds and lashing waves meant Kika was pinned onto an exposed visitors pontoon. We managed to scrounge around for more fenders as ours were taking a hammering and eventually during a lull in the weather took Kika round to a less exposed berth on Wednesday evening where we had a much more comfortable night.

We have had a day out in Newcastle where we toured the castle a solid Norman Keep designed to be a stronghold for dealing with rebellious northerners and marauding Scots. In fact to be safe in Northumberland during those turbulent times it was advisable to live in one of the numerous castles or fortified towers if you were a farmer. Such a peaceful county now with very friendly people. The Victoians built their famous railway and road bridge across the Tyne straight through the lower part of the castle Bailey splitting it in two, and the local newly formed antiquarian society just saved the keep! We also visited the cathedral where Admiral Collingwood a local man who completed Nelson's historic victory at Trafalgar is commemorated. Poor chap, he was never allowed a retirement and died at sea at the age of 62. There is also a rich merchants home, where his daughter Bessie jumped out of a first storey window and eloped with the son of a coal merchant. She obviously saw something in him her disapproving parents hadn't as he went on to become a lawyer and Lord Chancellor of England. today Thursday the weather is still bad and we are hoping for an improvement this evening to take us down to Sunderland. 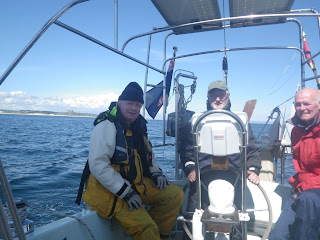 Gerry Pete and Glyn with Holy Island in the background Arriving in Blyth next
door to a cable laying ship 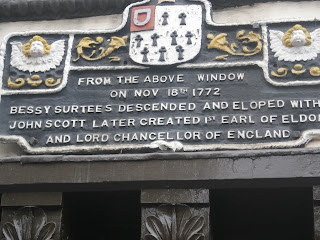