Kika and its crew have slipped into leisurely Island life.  Over breakfast while our minds are fresh we learn a few new Spanish words to try out later with variable results. Later we try and fix a few things around the boat.We've tried our hand at fibreglass repair. Our friends James and Debs Hedger came to visit for a week.
James built his own boat when we were at Medical School together so under his expert tutelage our damaged anchor locker lid is now as good as new. Still getting the hang of getting a good colour match for any repair , so there's a long way to go before
the job looks professional.

The economy here is interesting, officially the unemployment rate is 42%, however there's a large cash related tourist economy that never goes anywhere near the taxman, and the figure is not real. The port is busy ,however Las Palmas handling charges for a shipping container are around €89 while most other big ports do it for€55 . The unions are resistant to change so its likely the big companies will pull out, wait for the port to go bust and then come back when it's under new hard nosed management. That's how Capitalism works!

Oil and gas have also been discovered off the coast, so the local company DISA is sub contracting the job out to BP. The papers are full of the Gulf of Mexico disaster and the widely held view that BP can't be trusted.

We visited the beautiful mountainous interior of the Island with James and Debs. The height of the old volcano means that rain gets precipitated on the north of the island and trees can grow in the rich volcanic soil. At altitude Eucalyptus and every kind of conifer thrive. Periodically foresters and the fire service selectively thin the trees, then strip off the lower branches from the remaining trees, removing the brushwood. Finally they start a controlled burn which doesn't kill the trees but gets rid of the undergrowth and is good for the soil. Hey presto in 9 months time the forest floor is brimming with new plants and wildlife. Descending to the coast there are large plantations of banana trees all under plastic to keep moisture in and protect them from the wind which is bad in winter. Nothing really grows at sea level without irrigation all of which comes from desalination plants so farming here isn't easy. 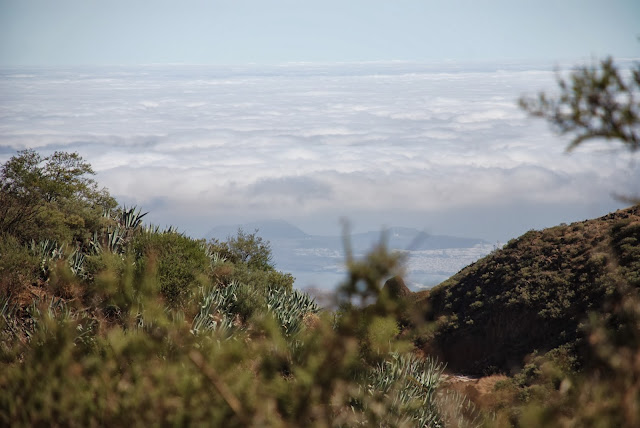 Colin and me decided to do a diving course. The first practical session was in the salty local swimming pool. We both managed to get large quantities of salt water into our nose sinuses eyes and throats. After we had spent the evening spluttering and draining clear fluids from our noses, Colin opined that we should have left underwater to the fishes. However with Jose and Gorkas encouragement things improved and together with our Australian friend and fellow trainee Heather our final dive was at 22metres where we spent nearly an hour talking to large shoals of fishes on a reef. We're just swotting up about Nitrogen narcosis and the bends and if we pass on Monday we can go diving in the Caribean and Pacific clutching our PADI certificates.

We live in a little boating community on our pontoon. Suzanne from Germany on a cruiser racer called Micadue and Bjorn from Norway with a Hallberg Rassy.  We knocked up a corn beef hash one night all cheap and cheerful, and were rewarded with two posh dinners on Suzanne's Micadue with top hole grilled grouper fish along with wine from her families vineyard.


The trip back to Bjorns boat was more eventful . Colin took a giant leap onto the stern grabbed hold of the bathing ladder which deployed downwards into the drink along with Colin. It took some time for Colin's head to emerge which was causing a modicum of concern , but Colin explained that as an apprentice diver he was merely taking time to equalise the pressure in his ears. Bjorn revived us with a Norwegian spirit drink called Aquavite drunk when you have put your anchor down . If you don't drink the " anchor toast" Viking legend has it your anchor might slip in the night. Bjorn explained that we could drink at least two toasts as Colin was heavier than his anchor.

Every day more ARC boats arrive including Clive And Judith on Sephina. Our crewmate James has secured a place on another ARC+boat where his engineering skills are already proving invaluable to the skipper so he will beat us to the Caribean in an aluminium cruiser racer where he even has his own cabin!  Dining out is cheap and we have managed to inveigle our way in to the posh Club Nautico which is a great place to chill out and have dinner with a load of Canarians dressed up to the nines. Clive approves! In one weeks time we will be on a hectic schedule of inspections, briefings, visits from home, provisioning and parties that make the ARC what it is . So the next blog will probably come from the Cape Verde Islands after things have calmed down at sea.