Our first impressions of a green land were mistaken. Old volcanoes form the landmass and La Graciosa and next door LanzArote form a brown arid landscape.  We arrived at La Sociedad the marina for La Graciosa only to be told to go away and anchor. The pilot describes the welcome as being poor even by Canarian standards- we agree!

We anchored in La Franscesca Bay and swam ashore.  The sand is quite dark due to the erosion of volcanic igneous rock which peppered the shoreline and all the rocks are light and porous due to the contraction of the molten larva.

We caught up with our American friend Jennifer who rowed her dinghy over for dinner. She is a deck officer on an American Tall Ship and is spending a year single handing her small 30ft ketch around the Atlantic circuit with a small Labrador puppy for company. She set off with a minimum of electronics and duff batteries which meant she had no engine accross the Atlantic, but her boat kept sailing and she used her sextant for positioning . She also speaks fluent Russian and trains horses.  She's only 29 so goodness knows what will happen by the time she's 60.

Next day we para sailed and motored down to Puerto Calero a beautiful Marina designed by Cezar Manrique an artist and local hero who had a profound effect on the quality of development on the island.

His own house is built into the volcanic rock and is now a museum. It was great to get a shower, cold beer and chill out at puerto la Calero whose staff were charming and persuaded us to hire a car and look round the island. We took the car up to the cauldron of fire ,the volcanic eruption in the late 1700s that had devastated the South of the island. You can still turn a bucket of water into a steamy geezer by throwing it down a hole into the mountain. Apparently up to 800 different species of plants and animals now colonise this barren moonscape, we couldn't see much apart from a few lichen.

The island has some beautiful beaches, but the land is struggling. It has had no rainfall for at least a year. The islanders have created some fields by excavating the original subsoil some 2 metes below the volcanic crust which has apparently improved the soils fertility. However unless a plant was directly irrigated which is expensive there was little sign of any crops. Even the vines which had hosepipes running alongside them were looking droopy. It's just as well tourism came along as before then Lanzarotes main export was its people.

Our voyage to FuertoVentura was marked by James catching a small Tuna. We immediately put into Puerto Castillo gutted ,deboned and marinaded it in lemon, soy sauce, garlic and cumin( I haven't got the hang of which herbs to use for fish) and fried up the chunks in olive  oil. It was a tasty and surprisingly filling supper ,washed down with a couple of beers ashore.

Colin had visited Puerto Castillo almost 20 years ago and remembered it as a sleepy place with the odd shoreside restaurant. It's now full of inclusive holiday complexes, where you wear an armband, get drunk every evening around the hotel pool where there's a community disco and go to your reserved section of the beach in the day.  Chacun a son gout!

We meandered slowly on , spending a night at anchor on the Jandia peninsula at the tip of Fuerto Ventura island before day sailing the 50miles across to Las Palmas on GranCanaria where we plan to chill out and refit the boat.


The harbour is huge. freighters, tankers pilot vessels and tugs are constantly coming in and out.  The container port is a staging point for multiple destinations in Europe and the huge cranes never stop.The marina houses a couple of tall ships along with the entire ARC fleet and you can obtain just about any part and get assistance for gear failure from a number of old established firms. We are berthed together with other ARC arrivals and discuss cockroach defences among other topics with our international neighbours. 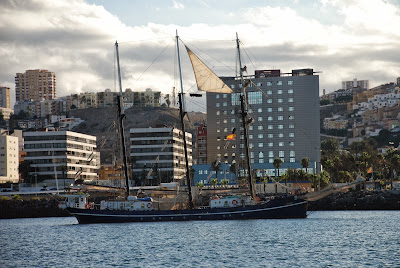 Kikas engine has not failed us, but it is virtually impossible to change the oil filter without dismantalling a a lot of other stuff, and the secondary fuel filter is pretty ancient and leaking diesel which leaves a characteristic aroma all over the boat. We eventually tracked down the new parts which had been stalled at customs pending payment of import tax and James began the process of installing the new system.  Helping James , makes one aware how a trained engineer avoids disasters. James looks at every system critically in terms of what could possibly go wrong with it and how to design a new fitting to avoid the problem. He spotted a loose thread on one of the oil fittings due to an imperial rather than a metric thread being supplied and we made our usual trip to the back streets in search of the right fittings in Spanglish. The hugely helpful hydraulics technician worked out what we needed and was very surprised to get a large kiss from a moustachioed ex Royal Marine when he came up with the goods.

To cross the Atlantic in reasonable comfort you need to generate enough power to keep the batteries charged up without using precious diesel and running the engine,especially at night when solar power doesn't work ie from 7pm  to 7am . Our secret weapon is the Duogen wind vane which can be removed and replaced with a propellor which is lowered into the water and also charges the batteries. It hasn't worked yet, but using the Multimeter as our stethoscope equivalent we have diagnosed a regulator failure . Carl Filer is on the case and is sending a new one out from Wales , so fingers crossed.


The next piece of kit that prevents mutinies from smelly crews when water is rationed is the water maker which sucks up seawater and by a process known as reverse osmosis where the water is pumped at high pressure through a membrane ,it produces fresh water.At first everything leaked like a sieve, however with judicious use of new jubilee clips and PTFE tape ( the plumbers get you out of trouble friend) we produced a litre of fresh water. The whole crew assembled for a water tasting ceremony . No sommelier could have waited with greater anticipation as one after another Kikas crew looked like multiple men from Del Monte saying yes.

So barring provisioning and a bit of fettling we are ready for the next leg. James will leave us and we will be joined by Louise Cook, Nick Orr and my brother Joe who will hopefully pole up in the Cape Verde islands. We are free to explore the delights of Las Palmas and Gran Canaria which got Gran in its name following the heroic resistance of the native Guanches to the Spanish conquistadors in 1495. The generals then tried to ship the population back to Spain as slaves, but Isobel de Catolica queen of Castille put a stop to it and returned the islanders to their homeland which has meant reasonable relationships with Spain ever since. 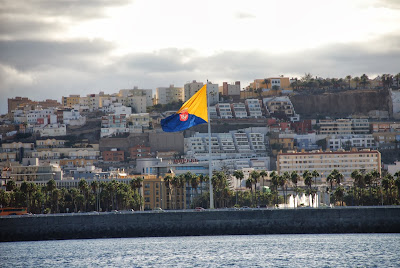 The town is big, full of posh shops and well dressed women. Las Palmas has been a free trade port since 1920 and judging by the prominent offices of Ernst and Young there's a lot of brass around . However walking back from the old town we went through not one but three long streets full of scantily dressed prostitutes all drumming up trade. We considered photographing this interesting sociological phenomenon for the benefit of blog readers but were deterred by the equally large numbers of pimps floating about. We searched the tourist guide book but it seems to have missed this area off the long list of cultural attractions.