We left Baiona with a westerly wind blowing up to 25 knots and had a fast passage down to Viano da Castelo in Portugal. As we approached our mooring  going up river past some large shipping we were hit by a wall of heat. It had been 35 degrees C today in town, hot even for the Portuguese . As we move south we have lots of new friends in the form of flies and Mosquitos and have deployed the mosquito netting for the first time. Viano da Costela is a friendly town. Various explorers set off from there to discover and finally colonise Brazil  but we just chilled out over a beer and watched Real Madrid beating up Granada on the big screen.

In the morning we woke to find our French fellow yachties with their pulpit bent and compressed under a gangway that had lowered onto it as the tide rose. There wasn't much to do except wait for the tide to drop again so we pushed off for Porto . Clive had zoomed down from Baiona that morning under engine and overtook us as we were sunning ourselves at 4.5 knots under the parasail. As we sailed up the river into Porto we were greeted by a fast rib with Judith on board steered by a young man called "NoNo". Judith had probably been saying just that as he turned up the throttle.

The new marina in Oporto is fantastic. 50% discount for boats on the ARC fresh bread delivered free of charge in the morning and a pleasant cafe which the locals patronise in the balmy evenings. On Wednesday we took the water taxi and then the ancient tram into town. Porto is scenically very dramatic with spectacular bridges and an ancient medieval town built into the rock of the river gorge. The cathedral was full of ornate wooden carvings in Madeira wood multiple alters but surprisingly little room for the congregation. After a splendid lunch in the back streets we proceeded across the suspension bridge for the serious business of the day- visiting the port cellars all located on the south bank of the river.


The port trade has strong links with England starting in the 17th century . The war with France meant no decent wine so fortified wine laced with brandy transported very well by ship back to England which made a glass of Port very popular. When Wellington landed in Portugal to help the Portuguese against Napoleon in the peninsular war. British companies got in on the trade so names like Sandiman , and Cockburn with a British interest persist to this day. The grapes come only from the Oporto region and were transported downriver by sailing barge to the port houses where the vintage ports take 20 years to mature in beautifully made oak vats. While making a detailed and knowledgeable analysis of the offerings of at least three different houses ably assisted by the rest of the crew, Colin was alarmed to discover that a vintage port requires drinking within 24-72 hours because it starts to deteriorate under oxidised conditions. Having opened a bottle of Colin's best vintage port a couple of days ago the whole crew has risen magnificently to the challenge of keeping the port fresh and as an otolaryngologist I can confirm the widely held belief that it is also beneficial to the vocal cords.

After an early start we are beaming along under parasail to complete the 65mile day sail to Figuera da Fos. Because of the dry conditions we can see large fires on the shoreline which reduce visibility but make spectacular sunrise and sunsets. Clive has radioed to say that a pin on his auto helm has shattered so we will look at it this evening. In the meantime he is hand steering.

We  made a brief stop at Figuera. James looked at Clive's auto helm . A rather inadequately engineered bolt had sheared between the end of the ram and the rudder assembly. It was not difficult to put in a better one, but it was better it happened here in benign conditions than in an Atlantic storm. Figuera was a lovely town with loads of restaurants and a casino. We were tired, went for a meal +beer , slept well and motored down to Nazaire  in the morning . Fishing at 5 knots is not productive . We will have to think of a cunning change of plan.
The marina at Nazaire had seen better days with a duplication of paperwork between the coastguard and the marina and a general air of neglect after the boom time money had run out. The nearby beach resort town was fun . Portuguese people are much more organised on the beach with areas for beach volleyball, trampolining and a whole line of beach tents. Fishermen salt and dry out fish on big racks and sell the fish to passing holidaymakers who progress as the evening wears on from beach to bar to open air restaurant as dusk falls (and Colin had left his camera on Kika!) . Wine is cheap fish are plentiful and the only problem we have is working out which fish is which in Portuguese .
From Nazaire we spent a long day alternately sailing and motoring the 70 miles to Cascais in the Lisbon estuary. The Portuguese trades are a steady  Northerly blowing at around 10 knots. If the wind speed drops below 10 we motor and above 10 there's a great shout for the parasail which provides a great sunshade in the morning.
We bypassed Lisbon and its pleasures and continued down to the port of Sines where we passed huge tankers and freighters waiting for a berth. Sines was a great place to chill out and give the engine a service. James with his engineers eye spotted an oil leak where I had failed to connect the engine breather pipe to the air filter, and  the washer on the primary filter was worn leaking diesel. Unfortunately we managed to shear the bleed screw and so we had two trips to the local industrial estate for parts. The blokes who sort you out are the same the world over . Wearing old brown coats and peering over their half glasses they rummage around and find exactly what you need. It's no good going to big flash shops ; you need to find the grey haired  professors bending over their lathes to find the right part for a boat.

Sines has a lovely old town with a castle built by Phillip 11 of Spain to dissuade any of the locals from revolting. It's most famous son was Vasco da Gama who discovered India for Portugal. His statue glowers out over the sea and he looks even more malevolent than Henry the eighth. Clearly not a man to be crossed if anyone told him you couldn't make it to India.
Eating out with the locals was cheap and good. At the end of the evening it was lovely to see the restauranteur his kitchen and front of house staff all sitting down to a well earned meal of wine and lobster.
Cive and Judith took off early this morning to get to the bright lights of Lagos however Kika is off to a quiet anchorage at Araffina which will hopefully be calm in the light winds.

We have been escorted for over an hour by a family of eight dolphins all performing aquabatics at the bow. They are rather difficult to photograph. 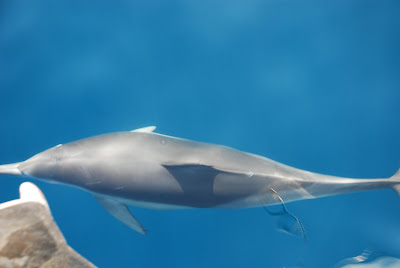